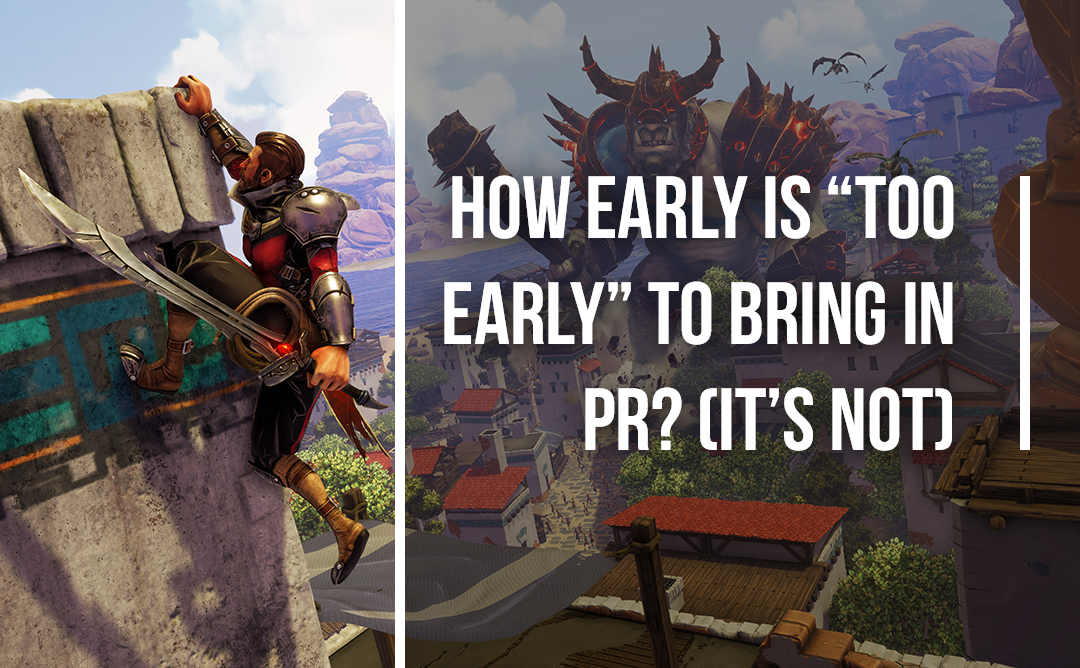 When should you consider bringing PR in on a gaming project? It’s the age-old question and one that doesn’t necessarily present a single, clear answer. Should you bring in support at an early stage to get your pixelated ducks in a row, or is the real benefit of PR found at the end of development once the framework’s been set?

Want our advice (and assuming you’re reading this, the answer is a resounding “uhh, sure”)? Just like you wouldn’t half-ass the naming of your game or its first trailer, you shouldn’t assume your comms strategy is better left to the final sprint. Ideally, it should feed into every facet of a game’s development, and that means kicking off comms talks early. So, without further ado, here are some of the reasons why you should consider PR even before you announce your game.

You are not special
Well, you are. We really like you. You’ve done a lot of great things, you’ve got an interesting game on your hands, and that’s why we’re stoked to work with you. But in the scope of the games industry, you can’t assume you’re special – especially if you’re an indie. Just look at SteamSpy’s breakdown of monthly releases. In September 2017 alone, 853 games were released on the platform, while an average of 590 games have released each month between January and September. With so many games launching each week, and so many AAA titles battling for the collective industry mindshare, saying that something is news won’t magically make it so.

Let us be the Bad Dev Cop to your Good Dev Cop. Consultation is just as much a part of the PR equation as pitching – it helps us as much as it helps you to make sure your game is newsworthy and recognizable. By considering PR nice and early, not only can we help you ensure there’s a solid hook (preferably a couple) that quickly and succinctly helps people recall your game, but it also affords the collective “us” the opportunity to build salient news beats from scratch. This way, you stay true to the game, while we get something that’s easy to pitch. Win-win!

From identifying human interest stories that press can use as a springboard to discuss your game, to creating assets (we’ve got tips for those too) that don’t just exist, but people feel compelled to share on social, these all need lead time. It’s not enough to say, “what’s newsworthy here?” a month before launch, but instead to take time to actually create something that’s inherently newsworthy and complements the game. And on that note…

Make your game accessible
After spending years of your life on a single project, it can be difficult to view it objectively. Just because you appreciate the 10 hours of build-up that lead to the “real game,” doesn’t mean press or influencers will feel the same. For better or worse, the people critiquing your game or playing it for the entertainment of others only have a finite amount of time in the day. Getting your game’s hooks in a player right from the jump can mean the difference between them playing it to completion or relegating it to their backlog.

So, similar to the above point, PR can help you get to the bottom of this early on, especially when you actually have time to course correct. We’re those fresh eyes, constantly looking for potential pitfalls, and seeking out proactive solutions to provide more incentive for press and influencers to love your game. Whether that involves tailored save states that empower influencers to go hog wild in a game’s endgame sandbox, or facilitating a press-centric online tournament to give reviewers a taste of your revolutionary multiplayer, some of the best PR plans grow out of the most simple development tweaks.

Kick things off with a rock-solid foundation
We probably sound like broken records here, but again, you can’t assume press will care about your game simply because it’s fun and exists. The games industry is a business, and fans represent the bottom line here. If there are fans to click on articles about your game, press will write about it and influencers will feed off that hype. While it’s one thing to let this community of fans grow organically from the beginning, we think there’s too much untapped potential here to ignore.

By building eye-catching, community-centric tactics into the earliest phases of a comms plan, you’re effectively giving yourself a head start on the more conventional (although still essential) side of PR. Sure, your latest trailer may not have the budget of this month’s AAA giant, but if you have a passionate fanbase that’s hanging on your every word, press and influencers have all the more reason to signal boost it and tap into the excitement and energy of these superfans.

As your personal PR specialists and consultants, we want to ensure that every early tactic (and then some) reaches, engages, and brings new fans into the funnel. And yes, this is more than simply thinking, “when this news gets picked up, people will read it and become fans.” It’s thinking, “fans are going to love the character introduced in this trailer, so let’s have them take over the game’s Twitter account on trailer day.” More fans = more potential for coverage, so let us make sure you’re starting on the right foot.

The big “but”…
It all comes down to lead time.

If there’s only a month between PR coming onto a project and launch, there’s only so much that can be done. We want to make sure there’s a steady buzz building around your launch day. We want people to be jumping at the opportunity to chat with you about your latest innovations. Sometimes though, the train’s already rolling and the tracks are already set. Sure, we can help build on the momentum that’s already there by writing a handful of press releases and getting review codes into the right people’s hands, but that’s only tapping into a small percentage of PR’s industry expertise. By allowing PR to weigh in on the early stages of development, this helps set tracks in place that will maximize the reach of each subsequent move through to launch, bringing in a larger, more diverse audience – from fans, to press, to influencers – at each stop.

Does this mean you should have active PR support month in and month out from inception to launch? Not necessarily. What this does mean though, is that critical insight from fresh eyes that want to see you succeed can help to proactively chart out a roadmap to success for your game, while ensuring there’s ample time to collaborate and put this plan into action.

How early in the process do you like to start hearing about a game? Let us know in the comments!