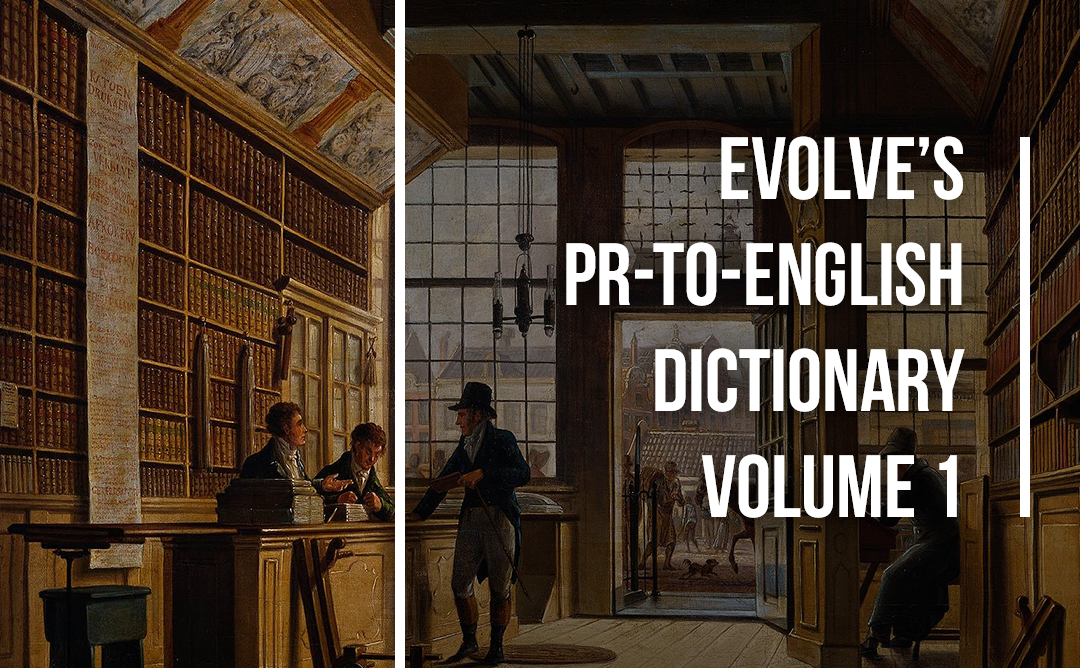 Something we find ourselves doing with alarming frequency here at Evolve PR is explaining different terms to people. Admittedly every industry has its own lexicon, and we work with all sorts of bright young devs, journalists, and content creators who are still picking up the games industry lingo. That being the case, we’ve put together a little glossary here to help translate exactly what some of the more devious and daunting games PR terms actually mean.

Let’s start off with the word that sparked off the idea for this little phrasebook: sponsored. When you are calling something sponsored, or when a company is offering to sponsor some of your content, that explicitly refers to money changing hands. Something that is sponsored has been paid for by another company, generally to advertise whatever wares they’re hawking at that time. It’s important to note that when it comes to games media though, that definition does not include receiving review copies of games, because those are necessary to do your job and create that content in a timely manner. Now that doesn’t mean you shouldn’t disclose that you got a game and anything sent with it for free (in fact we encourage you to do that) but calling it sponsored is disingenuous.

This is a pretty broad term and can encompass all manner of things depending on the game and what kind of content your channel or website produces. Generally though, Coverage refers to content you create using a review code or information from a press release. To help clarify, here are some short descriptions of the more common types of coverage:

An embargo is when we (or another company) asks that you withhold your coverage of a game until a certain date, generally just before release, often in exchange for early review code or access to otherwise confidential information. The reason these are put in place is twofold: The first is that it gives every outlet who gets code the chance to put together some coverage without having to worry about getting scooped by a site with a bigger staff and more resources. The second is that it ensures that the developers can put in any needed last-minute fixes and have those considered by reviewers, rather than having someone complain about a bug that regular players will never see thanks to it being fixed before release. To be clear, there are usually no legal ramifications to breaking embargo, but it’s still a real shitty thing to do. When you agree to an embargo, you’re giving your word that you’ll stick to it, and not doing so will definitely tarnish your image in that developer/publisher/PR firm’s eyes.

Also important to note, there will often be different embargoes for reviews and for video content, due to the differences between those types of content. When you see a Video Embargo, that applies to all video content, including both Let’s Plays and streams. That said if you’re making a video review, you’d want to follow the Review Embargo instead, as you’re making a qualitative judgement with that piece of content.

An NDA, or Non-Disclosure Agreement, is basically the bigger and meaner older brother of the embargo. Whereas agreeing to an embargo is simply a promise, an NDA is a legal contract that you have to sign, and could get sued for breaking. These aren’t too common, but if you end up getting a game extremely early, or have the chance to be privy to and report on some very exclusive news, there’s a chance you’ll be asked to sign one of these beforehand. Like any legal contract, it should be taken very seriously and read carefully before signing.

We already covered the topic of who is and what it means to be Media in a prior blog post, so we’ll keep this definition fairly light. Put simply, if you’re asking for review copies of games and using them to make any sort of coverage, then you are Media, with all the perks and responsibilities that entails. All you Influencers out there fall under this umbrella, as well. Even if your main outlet is Twitter or Facebook, you’ll still be held to Media standards and expectations in most cases.

Exactly what it says on the tin, a kit full of press materials and assets. These days it generally takes the form of a webpage where you can find screenshots, promotional images, contact details, and fact sheets detailing some basic info on the game and its developers all in one convenient place. Every developer does them differently though; some may have it as a ZIP file you download, as a public Dropbox folder, or they’ll use a service such as presskit() or Terminals (Hey that’s us!) to showcase all that stuff.

This is very much what it sounds like, footage that is recorded directly from a game system to an external device while you or the developer are playing a game, the latter of which you more likely to get at conventions. There are often varying rules regarding how you can use this footage depending on the context, so always be sure to check what they are before posting.

B-roll is generally direct gameplay footage provided by the developer or publisher for promotional uses. It’s intended to be chopped up, edited, and talked over after the fact rather than just published in its entirety and without comment; in fact some publishers and developers really frown upon outlets putting up raw B-roll. It was originally supplied so that news programs and the like had something to show on screen while they were covering whatever news story or game to which the footage pertained.

This term refers to any sort of promotional material that might be provided by a developer, publisher, or PR firm. This can include B-roll, trailers, screenshots, promotional art, and logos, pretty much everything you tend in find in a press kit. If you’re wondering how to make assets, and more importantly how to make good assets, our last blog post has you covered.

That’s just a small selection of the various terms that permeate our industry and may seem obvious, but are often misunderstood or misconstrued. Having a basic understanding of terms such as these is key for success, on both the PR and the media sides. That’s why, while some of these seem pretty self-explanatory, it never hurts to ensure both you and the PR reps you’re dealing with are speaking the same language, as it were. Just a simple clarifying of terms can prevent a small misunderstanding from becoming a very big problem down the line.

If you’ve got any other PR buzzwords that have been causing you undue confusion and distress, or that you’d simply like to be a bit more sure of, let us know in the comments or via social media, and we’ll put them in a second volume of this little glossary.