What Makes a Great Convention Demo? 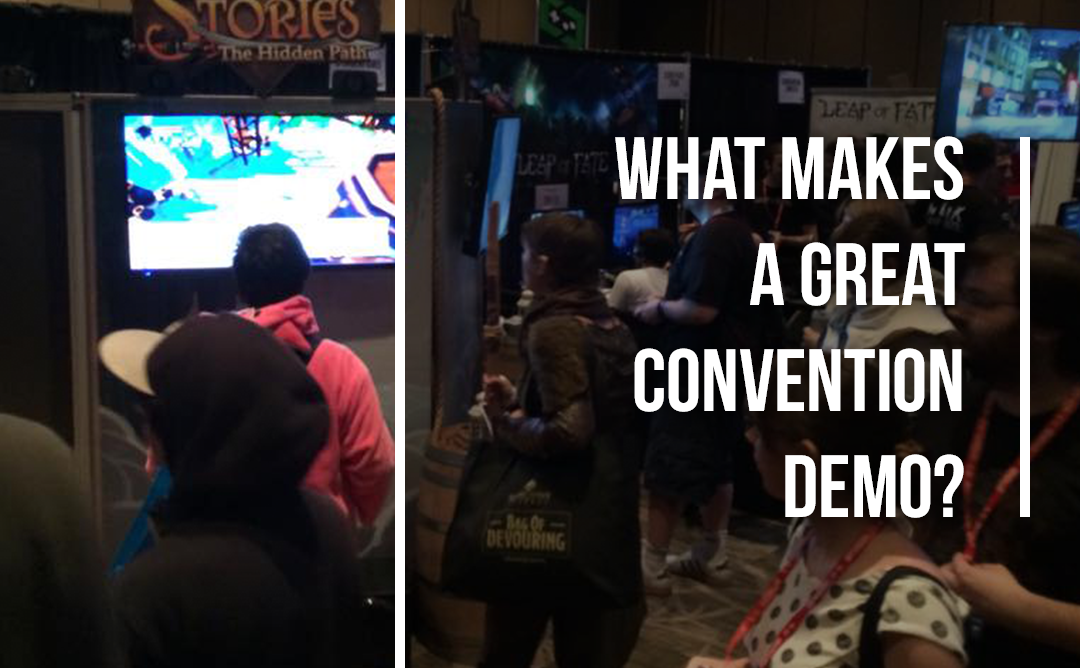 So you’ve announced your game. Maybe you even released an awesome, not-shit trailer that got a lot of views on YouTube. But unless your game is part of a blockbuster franchise, most attendees at your convention of choice probably haven’t heard about it. Those who walk up to your booth will most likely do so because the graphics or gameplay caught their attention, not because the game’s been on their radar for ages. So how do you nail that first impression?

Here are a few tips for building a short demo intended for hands-on sessions at conventions like PAX, E3, or even TwitchCon.

Make it approachable
Craft a demo build that’s newcomer friendly and easy to pick up, even for players unfamiliar with the genre. Include a simple tutorial that teaches the basics fairly quickly yet equips players with enough tools to feel awesome when they defeat an enemy or pull off a cool combo. Players should be able to grasp key mechanics rapidly and move on toward a clearly defined objective. (That doesn’t mean your demo can’t also cater to players who are more experienced with your game―why not sneak in a more difficult level for those hardcore fans?) Don’t risk confusing players with features or options that are not immediately relevant to the demo content.

Find some friends interested in giving it a test run before the show and if possible, study their behavior for areas that might trip people up. Ideally, you want to let the content speak for itself. If at any point you feel like you need to provide additional context or explain an event to your play testers, go back and tweak the build so that’s not necessary. Over-the-shoulder talk can be very distracting to players at conventions, and sometimes impossible if they are using headsets.

Keep the exposition to a minimum
Everything at conventions vies aggressively for attention, and it’s easy to forget how much of a sensory overload that can become. A potential consumer may be playing your demo, but chances are he or she is also talking to a friend at the same time, keeping tabs on the queue for another game they intend to play, thinking about their latest swag, or getting distracted by the neighboring booth’s bright graphics and loud music.

Cinematics and dialogue won’t hold attention for more than a few seconds, and you’ll find that they are often met with a very specific kind of impatient button mashing. And even if your title is the hottest thing at the convention, now’s not the time to introduce each of your 20 characters’ backstories, give a detailed account of the war they’re caught up in, or foreshadow your villain’s final form.

Put the spotlight on gameplay. After a day or more of playing games, attendees are more likely to remember how fun your game was than where its narrative was headed.

10-15 minutes is the sweet spot
Keeping your demo short makes wait times reasonable; players are more likely to stick around for a turn when they see the controller being passed regularly.

In addition, a lot of appointments with media are booked in 30 minute slots. Keeping your demo under 15 minutes means that even if the person you’re meeting is a few minutes late, he or she can still complete the demo and have time for a short Q&A. Be sure to read our analysis of what media tend to cover at GDC and PAX for an idea of what to expect from appointments at those conventions.

If you’re not too far from launch, it’s easy to bring a full game build and decide attendees will just move on when they want to. That can work in some cases, but it’s usually best to craft a demo specially for events that is more of a self-contained experience. Actually completing a slice of the game gives players a sense of achievement that they wouldn’t get by roaming in an open-world map, for example.

End on a high note
At the end of those 10-15 minutes should be a clear end point, one that is memorable in some way―whether that’s a really impactful cutscene, the satisfying feel of triumphing over a boss, or a sudden cliffhanger. It doesn’t hurt to have the release date and launch platforms appear on screen at the very end, too, or even a call-to-action like “Add the game to your Steam Wishlist!”

Of course, not all booth visitors will play to the end. Some will pick up the controller and decide the game’s just not for them, so don’t forget a quick reset button.

Do you have other tips for developers looking to build a great hands-on demo? Let us know in the comments!