How to Make a Not-Shit Game Trailer 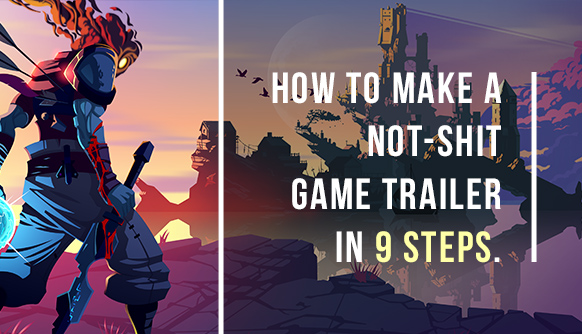 Creating a top-quality trailer that shows off your game and–more importantly–gives the viewer a taste of what it feels like to play your game, is the single most important piece of marketing you need to do. Everyone wants to make a trailer that’s hot-shit, but that takes a lot of time and experience so I would suggest just concentrating on making a not-shit trailer for starters and that alone will set you apart from most of the other releases. There’s so much depth we could go into but we’ve broken down the most important steps below to get you started. Follow these 9 Steps to DIY a not-shit trailer that will elevate your game.

DISCLAIMER: Only make your own trailer if you can do a proper job of it; they are too important in the success of your game to mess up, and must be taken seriously. They are the number one way to drive interest for many players, so don’t rush it. Hire a professional to help if you can. If you absolutely can’t, carry on reading…

Identify what you are trying to do and what info you need to get across (bare minimum). What is it that makes your game stand out? Try to condense your game down to one sentence if you can. What’s your elevator pitch, ie. what would you say if you had to explain the game to Gabe Newell whilst falling out of a plane together? Ideally it would be something short and specific like “indie shepherding platformer where pacified enemies join your flock.” The main thing is you need to identify the unique hook to your game. This is important for your entire marketing campaign, but particularly important in the case of a trailer.

Take the time to brainstorm a ton of ideas around your game and its core concept. How can you convey it in a creative way? Don’t be afraid to try something new and break the mold a little. Ask friends and family what it prompts in them, or play word-association games until you stumble upon an idea that captures the tone of your game but is still entertaining.

Step 3. Flesh out the structure.

This is an important step, where you start thinking about the structure of the trailer. Ideally you’d have a beginning that sets the scene, a middle with the info that you need to have in the trailer, and a crescendo ending that leaves people wanting more and tells them what to do next. Start to flesh out the middle first: what’s a simple way to get your info across that’s in-line with your idea? Is it a voice over? Is it text on screen? Or can you come up with something more creative? After you’ve figured this out, the beginning and end should come naturally. When you are ready, pick a music track and draft up a script / rough storyboard (just a basic idea of what’s going to be happening visually) and stick that to your wall so you can refer to it easily throughout the process.

Step 4. Capture the gameplay you need.

Here’s the fun bit. Now you have to go and grab ALL the gameplay footage that’s going to go into your trailer. You want to grab it in the highest possible resolution your computer can handle, and preferably with the least amount of compression. JUST GET LOADS. You may capture two hours of footage and only use a minute of it. But bear in mind that you need a) good hits, moments that look awesome and b) footage that supports your info; this means that if there’s a point you are trying to make in your trailer, get footage that backs up that point. People are way more likely to believe something is true if they see evidence that supports it straight after being told.

Start dragging the footage onto a timeline based on your script and storyboard. Make sure the moments that define your game are littered throughout your trailer and that there’s a collection of them right up front in the first five seconds. If it’s an action game, your trailer needs to be full of great hits, quick moments of action that show just enough for the viewer to go, “whoa, what was that?” If it’s a funny game, put your best joke upfront. If it’s atmospheric, hit them in the feels straight off the bat. Keep everything super tight, make sure gameplay moments are trimmed down to the only section that you need to see. The whole video should be no more than 90 seconds, so trimming down each clip by a few frames or so means that you’ll be able to fit in several extra clips–and the more variety in shots, the better. Remember, you don’t want to show the viewer everything, just enough to get them excited about what’s to come.

Depending on your VFX skills, here’s where you can add some flair to text, concept artwork, your logo. Spend as much time on this as you can afford, as it’s this polish that will take your trailer to the next level. Don’t just go for something badass like your text exploding onto the screen; try to make it in-line with the style and tone of the rest of your video.

Show your video to friends and get them to give you honest feedback on where they got bored, which bits seemed to jar with them, and if there were bits that were too fast. It really helps to have extra eyes on the video at this point, because by now you’ll be so immersed in the edit that it’ll be hard for you to see the wood for the trees. Make any tweaks needed to fix issues that come up here; you can move sections around, adjust text timings, duplicate your timeline, and try a completely different cut. Keep showing it off until it works for everyone.

You’re almost home, Dorothy. The final stage is the spit-shine. Here you’ll basically go through shot by shot, checking audio levels, colour grading, adding in sound effects, and checking whether everything is as smooth as it can be. Most of the traffic you’ll get on this video will be when you announce it, so once it’s out it’s too late fix a little thing that you only noticed watching it on YouTube. Try to catch those issues here as they are always in there somewhere. Happy hunting!

Finally, when you’re all done you can release it to the world and get started on your next piece of content straight away. I’m serious; don’t lay down! What are you doing??! That trailer is old news now; you need to make something new pronto, otherwise people will stop caring! Get to it! It’s a dog eat dog…..blah blah blah. Consider cutting your trailer into bite-sized morsels for use on social media, and also be sure to tweet and share your video regularly; as mentioned, the internet moves so fast that it’s easy to miss an awesome game. Be sure to give people as many opportunities as you can to find out about yours!