Breathing Space – Why You Need To Play More Tabletop Games And Work A Whole Lot Less. 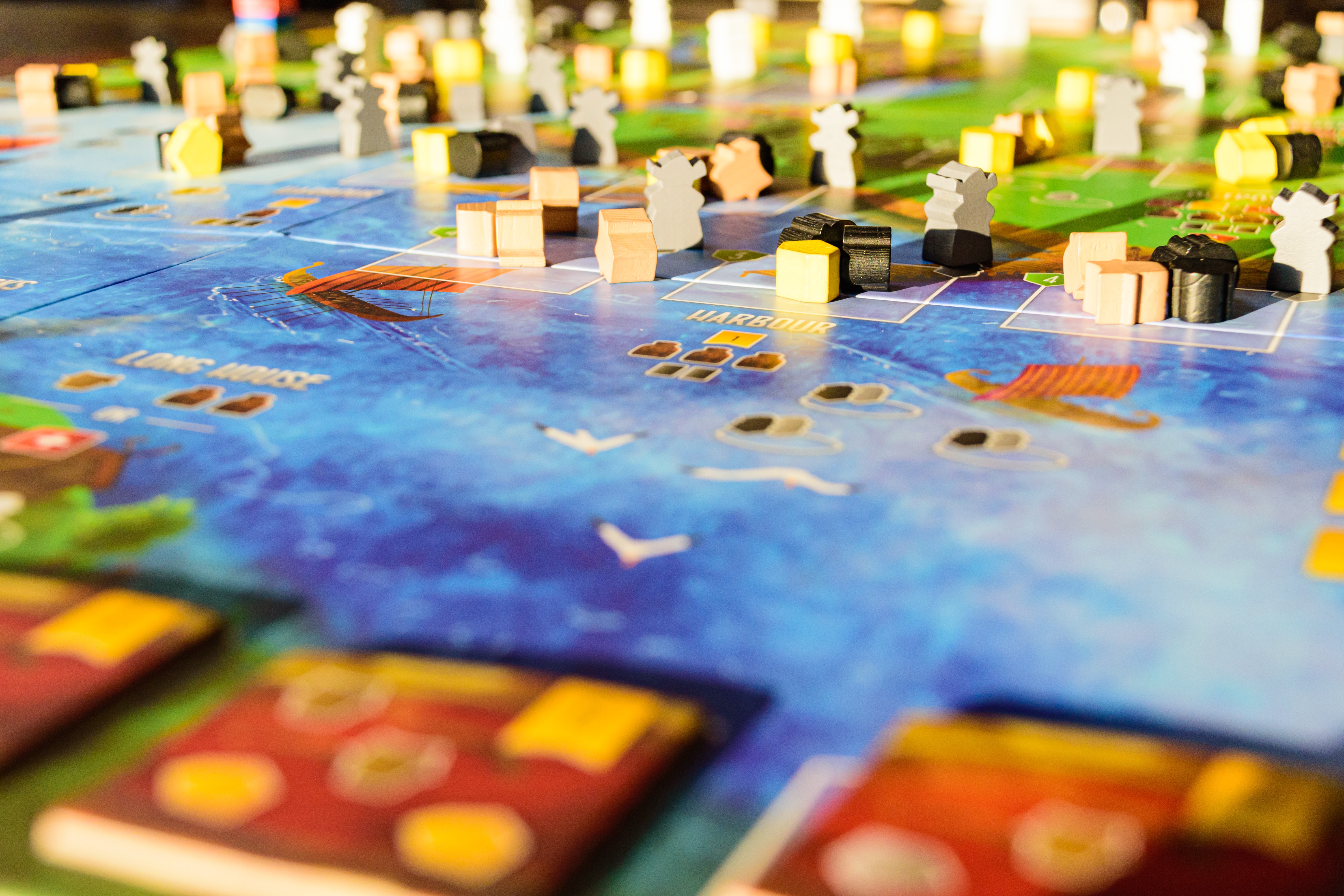 So here’s the thing: video games are cool and all, but I’m kind of getting a bit tired of them.

I mean, I still have my favourites that I like to revisit from time to time (shout-out to Earthbound, Final Fantasy Tactics, and Trails of Cold Steel), but the magic has somewhat dissipated for me. This is mostly due to having worked in the video game industry in some fashion for almost fifteen years now, and given the discussions I’ve had with many others in the same field, I’m well aware that I’m not alone.

That being said, while I may not be as high on video games as I once was, let me tell you friends, tabletop games are a wholly different matter, because they are glorious. In fact, I have a decent collection of them. Here’s a small sample:

I also have other board games scattered around my apartment, and I recently bought a 3D printer in order to expand interior storage as well as print terrain for my miniature wargames.

Is it a bit much?

Hi, I’m Christophe and I work as a research specialist at Evolve PR. A lot of my job involves looking at a screen and analyzing various forms of data and social metrics in order to answer questions we have concerning the video game industry. I’m here to tell you that you really need to spend less time working and a lot more time with one or more hobbies, preferably of the offline variety. In my case, my go-to hobbies are tabletop games, and I’m going to tell you why you should give those a try.

That being said, let’s get the serious bit out of the way first.

Overworking and burnouts: how hobbies can help you out

I’m not going to go too deeply into this, as I think that as an industry, we’re quite aware of issues concerning overwork and burnouts. Game devs can face some pretty intense deadlines and crunch periods, streamers at times feel the necessity to always be connected in order to maintain their audience, and both PR reps and journalists are constantly scrolling online and emailing each other in order to not miss a key beat. I get it. Sometimes, timing just doesn’t line up properly and we need to work a bit harder to get things done. The problem however is that for many people, this is becoming a very unhealthy norm which eventually leads to a personal collapse.

So, I’m here to tell you to stop. You’re not going to be a better worker by continually doing a longer grind. Instead, you can be a smarter worker by giving yourself some breathing space and focusing on things which make you happy in order to reboot your mental processes. Hobbies are a great way of doing that, and not only do they provide you with a much required reprieve, but they can actually make you a better worker in the long run by allowing you to tap into more creative aspects of yourself.

For anyone in the video game industry, it can be difficult to relax with video games given how involved we are with them. This in part is why I’ve come to appreciate tabletop games so much. They’ve allowed me to separate work and leisure in a more effective way. That’s not to say that I don’t analyze the games I play, or think about how my tabletop experiences can help in planning campaign strategies and future research questions. They certainly do, but more importantly, I’ll never think of those things in the moment, and that’s key.

So, let me tell you more about them.

Tabletop games are great, and here’s why

There has been an amazing effervescence in the tabletop gaming community within the last decade, and it’s quite easy to say that we’re currently in a golden age for the hobby. Board games have come to embrace themes and play-styles of all types, meaning that we’re now at a point where there’s pretty much a game for any type of person. Now, I know this doesn’t really make them sound all that different from video games, but here’s what I find to be most pleasing overall with the tabletop experience. I’ll also provide a couple of examples of my current favourites while we’re at it.

Communal play and breaking away from the online space

Put bluntly, I need time away from social media when I’m done with my work day. This usually results in me building models, and preparing things for either a board game night or a miniature wargame session, all in order to make sure that my limited time with my buddies is at its best. I am an absolute sucker for setting, so when I’m scheduling a game night, I always try to keep games of the same theme but of different genres available for selection.

One of my favourite examples of this is when I get Mansions of Madness: The Second Edition to the table. A game set within the Chtulhu mythos, Mansions of Madness tries to encapsulate you within its experience with the use of an app that takes care of most of the required bookkeeping. It also provides an eerie background ambience as well as sounds in appropriately tense situations in order to bring you further within its narrative setting. More importantly though, what ties this all together is the people at the table with you.

My best session involved introducing the game to some friends for the first time in a candlelit room. We began in the town of Innsmouth in order to investigate a murder which had occurred in the area, starting with the local inn where our characters resided.

After fully exploring the town, one of my friends had lost the power of speech and was virtually unable to communicate with us, while another developed a taste for arson and was obligated to create fires everywhere they went. Our failure resulted in an angry mob going through Innsmouth, and were subjected to our only naval escape route being torched by angry locals, meaning we were stuck in a very hostile place that ultimately led to our demise.

It was by far one of our most memorable board game nights, with the tension and anticipation of the game fuelling the experience, mainly because of how we responded to each other’s actions in the game.

While I’m not saying that you can’t have a similar story online, there’s just something about being able to cut out the rest of the world, and focus on a singular moment with friends in a shared tactile experience. If a horror setting might not be your thing, you can find board games about building gardens, or exploring new continents. It doesn’t really matter as there really is something for everyone. The important thing is to be able to cut away most of the digital trappings which keep you aware of your professional field. Personally, I’ve found narrative tabletop games to be one of the most successful ways of getting my mind off of work, and one of the best ways of enjoying my free time.

Miniature wargaming: like chess, but with a place for creative design

I don’t know about you, but I was a huge Mighty Max fan as a kid. I used to love playing with my tiny figurines in my little pocket sized dungeons, or in the awesome volcano base that everyone wanted to have. Honestly, I still find them kind of cool. Well, tabletop wargaming is kind of like Mighty Max for me, except it involves larger models, cooler tables, and a rule set to play them with.

My go-to games lately have been Game Workshop’s Age of Sigmar, and Corvus Belli’s Infinity. Both provide a different tactical experience, as well as allowing for different types of hobbying.  For me, AoS is all about creating a more cohesive and thematic force, while Infinity allows me to play around with a lot more terrain building (hence the 3D printer).

More importantly, it allows me to get a bit creative. Both games require models to be built and eventually painted. I like art, but I’ve never been drawn to creating any of it myself. With miniature wargames though, I’m able to get a bit of a taste of it in the goal of making a faction truly my own. I may not be the greatest painter, but I know that I’ll get there with practice, and it feels quite good to see myself progress on the table when I get my units ready for a game.

I also came to the conclusion that I really like basing models (the process of painting and decorating the base upon which the model is glued) more than painting the miniatures themselves. In the example below, I used model bases here to create corpse markers for Malifaux, another miniature wargame. I had decided to experiment with still water effects for the first time, and had found it immensely satisfying once the final results were achieved.

And finally, building and printing terrain for my games has also been a big priority for me. As I mentioned above, I’m a sucker for theming and immersion, so I try to make the tables fit when playing a scenario. I’ve only recently started accumulating terrain, but my main idea for my Infinity table (a 4×4 ft. play area) is to eventually get a nice sci-fi port setting done at some point this year.

Board Games can be played with two players, sure, but if you’re looking to find something which might provide a bit more variety, all the while including different creative hobbies within the process, you can’t go wrong with miniature wargaming. There are plenty of two-player sets for various games to help people get started, and you’ll always be able to find communities ready to assist with learning the game. It’s pretty cool stuff, and you should really consider it.

So, person reading this blog post, here’s my hot take: you need to work less.

I don’t know who you are, I have no clue why you’re here, and it really doesn’t matter. You might be a game developer, a streamer, a journalist, or just someone who doesn’t know how they landed on this blog. No matter who you are, work less and breathe a bit more. Whatever hobby you might have, make sure to give it more of your time. Life and work balance is a thing, and developing it will only make you feel better overall in both the professional and personal spheres of your life.

I, of course, strongly suggest board games and miniature wargames. If you’re not sure about where to get started, feel free hit me up on Twitter at @o0Valadar0o and I’ll gladly assist you in finding the right match.