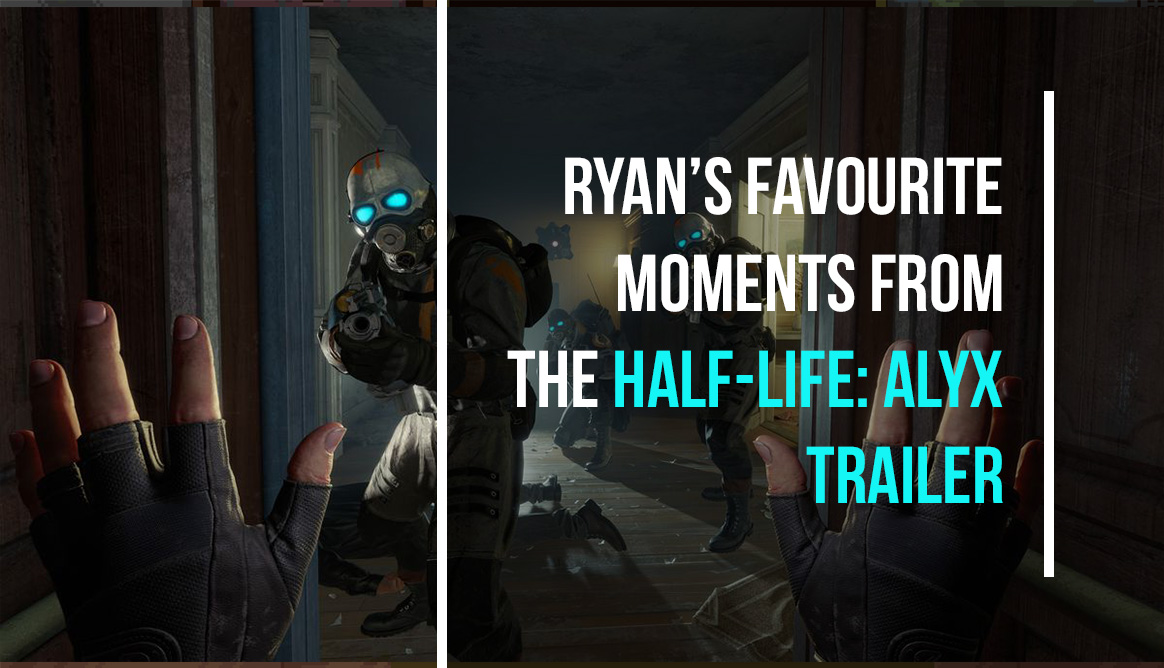 Hello people outside of the room I’m typing this in, these are the words of Ryan, head of the Evolve Originals team. As you may or may not know, Evolve Originals is the company’s video and creative team, where we build trailers and other promotional content for our clients. I love watching fantastic trailers made by other trailer makers in the industry, and so it felt like a good idea to start dissecting trailers that catch my attention, in the hope that I can extract some tips for anyone out there interested in what goes into building a solid and effective trailer.

I know this is not very timely, as Derek Lieu’s Half-Life: Alyx trailer has been out for over a month now. However, I want to write a few notes on why I love this trailer. I feel like any trailer maker, including myself, can learn a lot from taking a closer look at the craft that Derek has put into this. There’s so much here that’s great, but I’d first like to talk about some of the moments that really stand out.

Part 1: “Whoa. Does this mean everything is interactive?”

Starting the trailer with the sound of Alyx trying to calm her breathing is instantly arresting and makes the viewer pay attention, almost readying themselves in the same way for what they are about to watch. The first thing we see visually is just one continuous shot from 0:05 to 0:18, and it’s all timed perfectly.

We hear a classic Half-Life electricity sound effect, which Derek could have easily replaced with a fuller, more modern sound effect, but probably chose for nostalgic purposes. As something scurries across the screen, we get to my first favourite moment: Alyx moving aside the trash can on the shelf. The trash can doesn’t have a fancy texture or a light shining on it; it just looks like a completely generic object, but the fact that you can move it instantly implies that you can interact with EVERYTHING in this game! It’s an exciting moment and one that I’m sure a lot of thought went into.

The reaction from the voice-over artist when the beautifully-lit Headcrab attacks seems deliberately calm—more shocked than scared—which conveys Alyx’s competence in this world. As the screen goes black for an abnormally long time, we realise we are about to see a lot more.

Part 2: “Ah-hah! Interacting with objects is how you survive.”

The second act of the trailer opens on the first external shot we’ve seen, showing cables leading to a half constructed citadel. This serves the purpose of establishing when the story takes place for those familiar with Half-Life’s timeline. Next, the scene is further set with an interesting shot of a faded mural on a wrecked school and a Strider patrol tower.

This is followed by a shot—similarly composed like the previous citadel shot—of what I assume must be the vault. We see the first bit of puzzle gameplay followed by a reminder that Alyx has some cool tech on her gloves, but what do they do? Rhys Darby’s character is going to help us find out.

This scene where a gun is thrown to Alyx is so memorable, and Derek uses this comedic moment to add some punctuation to the trailer. The epic sound design takes a quick break allowing us to soak in that the quality of the writing that the game will offer. As Alyx picks up the gun from afar we realise that the gloves are gravity tech! We’re given a brief moment to catch our breath before Derek ramps the action up and the next key point gets hammered home: interacting with objects is the fun part. The gravity gun mechanic from Half-life 2 has been incorporated into Alyx’s gloves. This gives the idea that all objects might be interactive a whole new dimension; now we can grab and throw stuff at the Combine! The quick barrel dodge followed by firing a few rounds of the pistol is a great few seconds of action that further builds excitement around just how fun this is going to be.

After a masterful cut between an explosion and a wall break, there’s an incredible one-shot of Alyx searching a shelf for ammo and using it to take out a Civil Protection Officer. It’s expertly timed, probably my favourite scene of the trailer and implies that each environment will have a massive amount of detail. After the screen goes black we are left with the iconic death sound, giving us another moment to pause and reflect on what we’ve seen so far before heading into the third act.

Part 3: “Get creative, because it’s about to get serious.”

This is where the trailer takes a dark turn and we start to get a glimpse of the plot. The opening shot of the Combine raiding a house is very important. Not only is the lighting great— the blue of their eyes is complimented perfectly by the yellow light streaming in through the door behind them—it also serves a functional purpose. The player holds Alyx’s hands up in defence, which reminds us that this isn’t a cinematic cutscene; this is all player-controlled gameplay. This is an important moment as player-control is central to the Half-Life franchise.

As a Strider looms overhead on the next shot, the VO raises the stakes, and the trailer gets darker. This moody shot of a Headcrab getting sucked up by a Barnacle fits well here but would have felt out of place in the lighter, more upbeat portion of the trailer.

The moment where Alyx throws a box at a Combine soldier is great, because it shows you that you can get creative with objects and play around with the game’s engine. We also see Alyx disarm a soldier of one of his grenades. Derek is drip-feeding us with ideas on what we can actually do in this game, making sure we’ve comprehended each mechanic before moving onto the next. This technique leaves us with a huge sense of scope on what’s actually possible. At the same time, Derek expands our perception of the game’s size by showing us drastically different environments and enemies in rapid succession. You see him use this a lot in this final section – I especially love the shot with the hanging corpses!

The voice-over line from Alyx’s dad leads the trailer to a climax, and we are left with a shot of the vault again. This time there’s some extra head-bob, which is there to remind the viewer that this is a VR game, and the player has been in control of every shot in this trailer. As the logo simply fades in we are left wanting to see more, the sign of any good trailer. So we wait, post-logo, where you’d normally click away, but the absence of a final impact in the sound design subconsciously tells us to keep watching, because it’s not over yet. That’s when a familiar face steps forward into the light, eyes first, followed by a silent date on the screen.

And there we have it. Hopefully you (but mostly me) have learned something from taking a closer look at this very well-made trailer! As we’ve seen, Derek broke the trailer into three parts. Part 1: Establish the interactive environments, Part 2: Bring in the gravity gloves and their uses and Part 3: Set the stage for the plot to unfold and raise the stakes

. He also used a wide variety of advanced editing tips to keep viewers captivated. It’s great to see the amount of attention and care that’s gone into this trailer, and definitely inspires me to keep building on my own craft as a trailer maker. So Derek, if you are reading this – cheers! ?