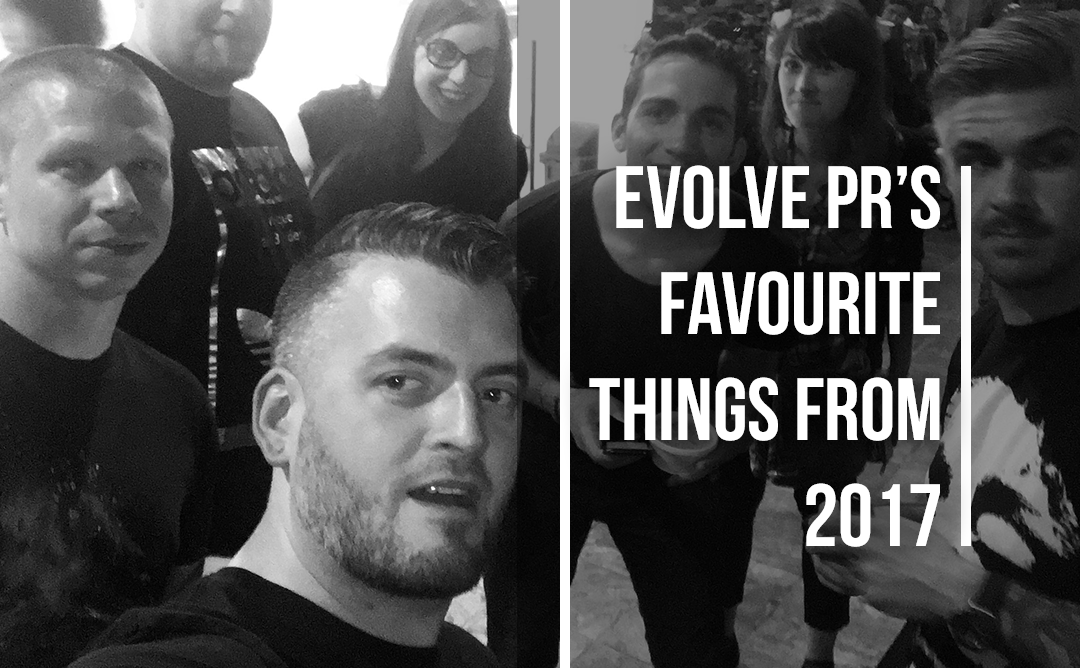 The year is almost over, so we here at Evolve PR thought it would be a good time to do our own “best of the year” list! Here are our favourite things that we worked on this year! 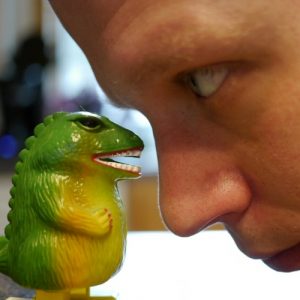 I had the good fortune of working with some fantastic games this year, including Outlast 2, Fortnite, SUPERHOT VR, Frostpunk, and SOMA. That said, my favorite part of 2017 has been working with Nidhogg 2. I love the the DIY spirit and creativity of working directly with small studios. From setting up booths to slinging cassette tapes at the merch stand and wearing a giant wurm mask, few projects have been so deeply hands-on. Let’s not forget the fans. I’m not sure “enthusiastic” adequately describes the amazing reception they gave us at every event. Of course, I also have to give a shout-out to the developers, Mark and Kristy, for being so awesome every step of the way. If not for them, I think I can safely say I’d have never experienced the joys of walking through a Boston snowstorm for ice cream. 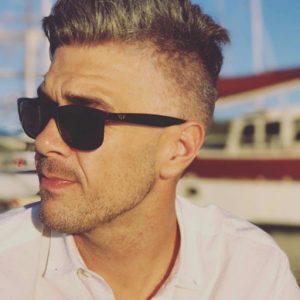 My role here is a bit different; I don’t work directly on a lot of campaigns these days, but touch on just about every project at some point–whether it’s helping to bring the client under our wing, or kind of keeping an eye on things as our work progresses. As such, it’s tough to narrow things down into a “best of 2017,” but I can say that, as a whole, it’s been an incredible year for our team. It’s been amazing to launch games like Fortnite, Conan Exiles, Observer, Outlast 2, The Surge, Dead Cells, Perception, and so many more. We continued supporting major projects like Gwent, We Happy Few, and SUPERHOT. We’ve launched a video-production department, popping out great videos for SOMA, Beholder, Dead Cells, and more. We’ve been pushing growth of Terminals.io as we prepare to launch it formally… and we’ve almost hit 2 million pageviews in 2017. That’s bananas. Our social and community efforts are also kicking up as we head into 2018. Looking back at this year, I can’t tell you how excited I am about the future. 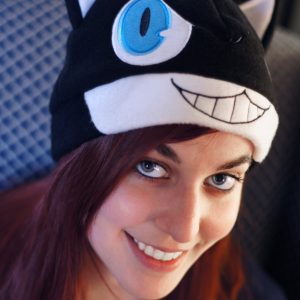 My highlight of the year has to be helping out the folks at Magnus Games with their Kickstarter campaign for Re:Legend. With monster-collecting RPGs being my most-played genre, I immediately latched on to the adorable Magnus creature designs in Re:Legend. When I discovered that Re:Legend would not only let me breed and raise these creatures, but also perform a huge variety of life skills to expand my home, and do all of this in co-op, I saw enormous potential. All of us on this project were super pleased when the word spread very easily and over 7,000 backers joined in by the end of the campaign. It felt great to help Re:Legend get the reach it deserved and to see that so many others are just as excited to start befriending Draconewts and Momochis in 2018. 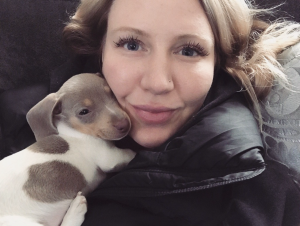 My role here is much more behind the scenes, making sure things run smoothly for the fabulous team here at Evolve! I’d have to say my “best of 2017” is all the hard work I have seen throughout the year (corny but true :)). Running successful PR campaigns in this day in age is no small feat! My hat’s off to everyone here! And let’s not forget that we welcomed little mister Mochi to the team this year, as well! I’m still trying to figure out how to corrupt him into being our company mascot, although I’m sure he’d love to get his paws on some sweet indie games!  Looking forward to the new year ahead, BRING IT 2018! We gots this! 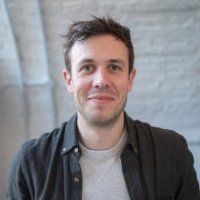 There were so many variables with this trailer and so many things that we weren’t sure were going to go well – we created a new character and a new scenario, we had to capture custom scenes in order to tell this mini-story as well as film a live-action “interview” with a real actor that we then had to make look like a computer program. But things just kept coming together, Frictional Games were fantastic at working with me to build and capture the perfect scenes for the script, the actor came through with a really fascinating performance and finally Sweet Justice sound took the trailer to the next level by adding in some super-crisp SFX. All in all, I really love the way that the trailer came together and I think we’ve ended up with something exceptional. 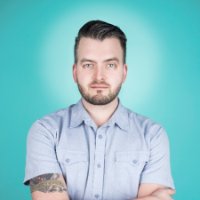 2017 was a busy and challenging year. Between Sniper Ghost Warrior 3’s full launch, Dead Cells’ Early Access launch, as well as work on so many other games, it’s tough to pick a favorite thing I did this year at Evolve. I suppose one that stands out most to me is the announcement of Extinction. There was a lot of preparation leading up to it and a lot of outreach to make sure media had all the details for the announcement. But, it wasn’t just the announcement that made it enjoyable, it was the work leading up to and at E3 immediately after the announcement that made it most fun. We showed the game to so many people over the course of the event between the meeting room, the YouTube Gaming stage show, the Twitch stage show and the IGN stage show.

But it was also having the opportunity to meet so many people in media, YouTubers and Twitch broadcasters that I’ve talked with over email and social media—some for the first time ever—that truly made the experience special. Finally, events like these are some of the few times where Evolve as a team gets to see each other in-person, which is always a special occasion. 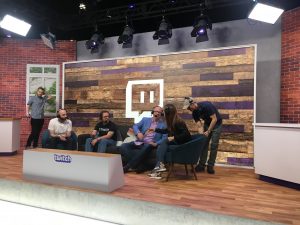 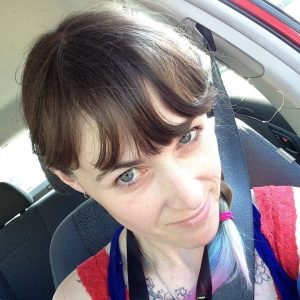 My favourite moment of my role here at Evolve PR in 2017 was definitely getting to attend E3 for the first time, especially on the first year where so many fans flooded into the event alongside press. The enthusiasm was infectious, to be surrounded by so many people who loves video games so much. Everyone was speaking a language I’d been confusing others with for so long! That and getting to meet my coworkers for the first time. Working from home can be isolating, so getting some facetime in with the people I work alongside really helped solidify the “team” feeling. 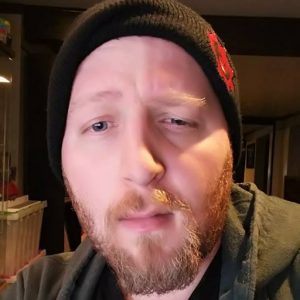 I’ve honestly worked on a lot of cool projects this year, and picking one was no easy task.So I didn’t.

Instead, I’ll just say that my favorite bits of 2017 included research on both Warhammer 40k and Warhammer Fantasy. I’m a huge tabletop gamer and have always loved the WH40k and WHF universes, having played the second edition of the WHFRPG for over fifteen years. Getting to look into the lore and fandom of these settings was a highly enjoyable task which allowed me to steep myself completely into the hobby scene.

In fact, it convinced me to get back into miniature wargaming. Within the last week, I’ve acquired two WH40k armies (8th edition is pretty great) and have met some awesome people at my local game shop. Granted, I’m significantly poorer now, but also happy to be gluing and (soon) painting again. 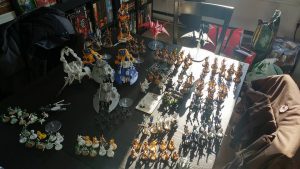 Craftworld Eldar impulse buy (one of many). 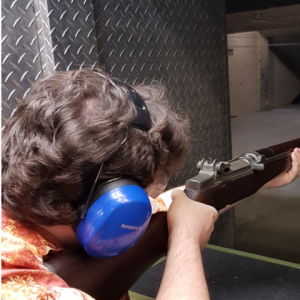 2017 has been the year Evolve really started leaning into research, which meant I got to be knee-deep in all sorts of cool initiatives; some of which we’ve talked about here on this blog. My favourite project by far though has been our continuing efforts to better understand the video gaming public as a whole. In the course of that work I’ve gotten to delve into a number of gaming communities such as the Giant Bomb forums, NeoGaf, and even 4chan’s /v/ & /vg/ boards. While there were some vast differences and a major diversity of thought across the sites I looked at, I found a passion for video games everywhere I looked. It’s been a great reminder that despite our differences and disagreements, we’re all human beings and we’re all gamers, no matter where you hang your hat. It can be easy to feel locked into the sphere of the games industry & media, but this window out to the wider gaming world has provided me with a perspective that has more often than not been extremely heartening. 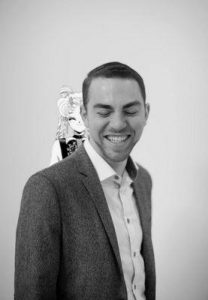 It’s easy to see what we do and assume it’s all fun and games. Well, it is fun and it is games, but that’s beside the point. Sometimes, you get the opportunity to support on something that stands to make a tangible impact on the world around you. Mulaka is one of those games, drawing upon extensive research into the rich history and myths of northern Mexico’s indigenous Tarahumara. Over the past few months, I’ve had the immense honour of working with the team at Lienzo to help them launch a three-part documentary video series called “Behind Mulaka,” supporting from conceptualization, through planning, into editing, and finally culminating with the series’ release. The series tackles topics ranging from the history and legacy of the Tarahumara, their mythology, and the role video games play in preserving culture. While it’s been an incredible experience from a personal perspective to work with the team at Lienzo, more than anything, it’s been inspiring to see such a passionate group of people working to make the world a better place through a medium we all love. From using Mulaka as a vehicle for sharing diverse voices on a global scale, to providing an accessible and entertaining touch point to ensure Tarahumara culture won’t be lost among future generations, Lienzo’s doing something really special here. 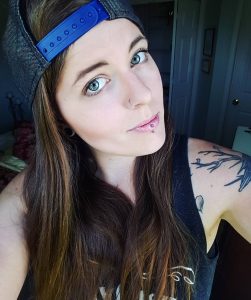 My favourite project this year was probably Old Time Hockey, an arcade-style sports game. I’m a huge hockey fan and so are most of my family and friends. It was nice to work on something that even the non-gamers in my life were excited for.

I also got to spend time researching sports outlets. As hard as some influencer’s emails are to find, I discovered it’s near impossible when it comes to sports journalists. We did get the game featured on BarDown on the TSN website, which was probably the highlight of my work year. 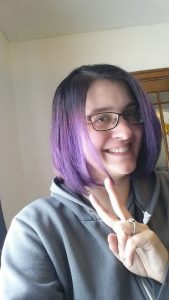 My favourite thing I did this year was definitely moderating the GWENT Twitch tournament streams. Being a bit of an e-sport fan, this was just so cool. Seeing the start of a new e-sport and watching it grow was amazing. Both tournaments I’ve moderated have been super exciting, with lots of last minute plays and really suspenseful moments. The GWENT community is so fun and passionate and made moderating the streams easy for the most part (of course there are always trolls). The CDPR community team are just fun people in general and are an absolute pleasure to work with. I’m really excited to see the heights they reach in 2018! 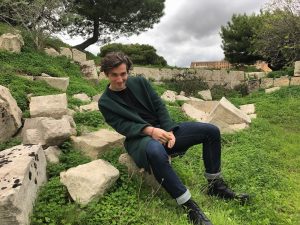 Ahhh, 2017 is almost over. It has been a crazy year, both personally and professionally, but one of the best for sure!

One of my favourite moments had to be my experience with Joe Mirabello of MOTHERGUNSHIP at PAX West. I’ve worked and attended a bunch of events over the past few years, but this PAX West will go down as my favourite simply due to the time I got to spend with a developer I have a lot of respect for. I was unsure what “rooming” with Joe for a weekend would be but it was simply great. We spent hours talking shop about the industry, MOTHERGUNSHIP, and personal experiences. Long hours on the floor were followed by good food and even better chats each night WHICH is usually not a good recipe for vocal chord conservation, but eh, who cares!

I’m also incredibly thankful for the opportunity to meet many others in this industry from all places and sides of it. Turns out, a lot of you are all super awesome and I hope 2018 is filled with just as many, if not more, great new friendships!